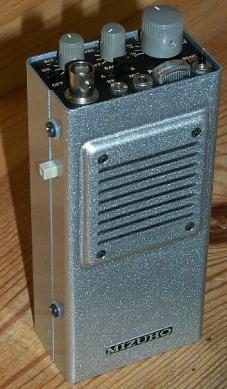 If there is one Mizuho radio most QRPers are familiar with it's probably the MX series SSB/CW HF handhelds, though not everyone knows them by that name. The two watt HF and one watt VHF versions introduced in 1983 and were produced until 2002, a total of 19 years, making the Mizuho MX series handhelds probably the rigs which lasted longest on the market of any ham transceivers ever produced. As a whole, the MX or Pico transceivers were in production for 21 years. If you don't know them under the Mizuho name, perhaps you've seen them as the AEA DX-Handy or with Santec's JIM nameplate. Models have been made for every band from 80m up through 2m including 12m and 17m. Only 30m has been excluded. The MX series remain popular with QRPers the world over. 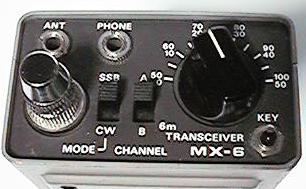 The first of the series released was the MX-6 (pictured at right), a 250mW 6M SSB/CW transceiver which ran on either on a single nine volt battery or 6 AAA cells, was released in Japan in October of 1981. In August, 1982, an improved version, the MX-6Z, was released, and was quickly followed by a 200mW 2M version (model MX-2) and a 300mW 15M version (model MX-15): the first Mizuho HF handheld, pictured below the MX-6. 10 meters was added to this series in August of 1983 with the 300mW MX-10Z. Note that all the models after the MX-6 added a noise blanker and replaced the second antenna jack and the phone jack with a more traditional speaker/mic. arrangement. The milliwatt Mizuho handhelds were successful despite the miniscule power output. They, like most Mizuho products, were sold both as kits and as built and tested radios. The 200-300mW Mizuho rigs were initially distributed in the United States by Ace Communications of Irvine, CA. Accessories for the early versions of the MX series rigs are now hard to come by. Many of the accessories recently made simply do not fit or work with the early rigs. 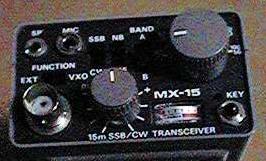 In May, 1983 Mizuho broke new ground for the series with the release of the MX-6S. This radio has remained in production until 2002, and almost all subsequent Mizuho HTs are based on this model. The MX-6S sported many new features: a full watt of output power, an S/RF meter, RIT, a charging circuit for NiCad (or later NiMH) batteries, and later an RF attenuator was added as well. The volume control was moved to the top of the rig as another rotary knob, and the latching PTT switch found on the milliwatt versions of the rigs was replaced by a more conventional momentary switch. The mode switch was shifted to the bottom of the rig. The MX-6S proved immensely popular, and was quickly joined by the MX-7S for 40 meters and the MX-21S for 15 meters. Mizuho now had handhelds for the three Japanese novice bands.

The line was gradually expanded to include models for all the remaining HF bands except 30 meters. Additionally, Mizuho introduced a number of accessories, including the CW-2S sidetone/QSK unit and a series of 10 watt amplifiers. A mounting bracket to contain the entire "system" and, in effect, create a mini mobile monoband HF station was released, and such a system based on the MX-7S is pictured below, left. 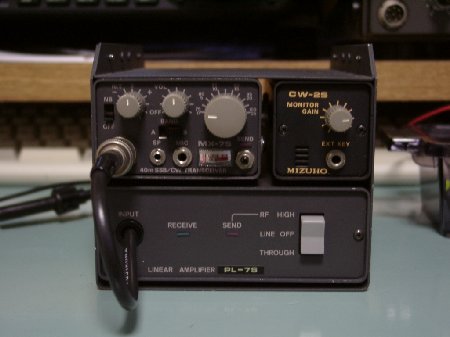 In the mid '80s Ace Communications sold most of the Mizuho line in the United States under the Mizuho name. After they disappeared, AEA picked up the MX-6S and MX-28S (2 watts on 10 meters) and marketed them as the AEA DX-Handy. By 1993 jCom had picked up the line and sold the MX series as their Pico transceivers. When jCom went out of business Ramsey Electronics bought out and sold off their remaining stock but did not continue to import Mizuho products. Mizuho equipment has not been distributed or sold commercially in the United States or Canada since the mid 1990s. In 2002 the venerable line of monoband handhelds was discontinued. Radios do turn up on the used market all over the world including the U.S. and U.K. Mizuho continue to offer repair service and new VXO range crystals. 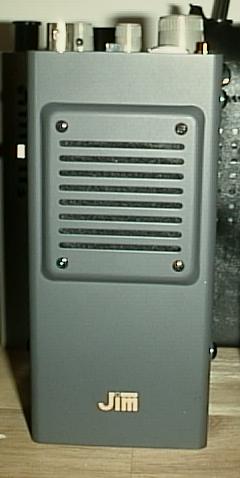 The MX-7S(T), MX-21S(T), and MX-6S(T) were the last Pico transceivers produced in Japan, with the final production run taking place in 2002. Mome accessory items, such as the CW-2S and the BM-6 soft case, were discontinued in 2002 or 2003. Mizuho outsourced production of the MX series handhelds to Santec from the mid '90s until 2002. Some recently produced HTs will have the Mizuho nameplate, while others, including all the latest ones, have been branded with Santec's JIM (Japan Information Medium) label.

Speaking of accessories, many can still be purchased from a former Mizuho dealer in the U.K., Waters & Stanton.

Despite the advent of rigs like the Yaesu FT-817 the MX series remains popular with some QRPers due to their light weight and low power consumption. The 2002 production run sold out quickly. Unfortunately, there are no plans at present for Santec to produce any more handhelds for Mizuho as many parts are simply no longer available or have minimum orders exceeding current demand.

Below is a picture of the different looks and brand names sported over the past 22 years by the MX series handhelds: 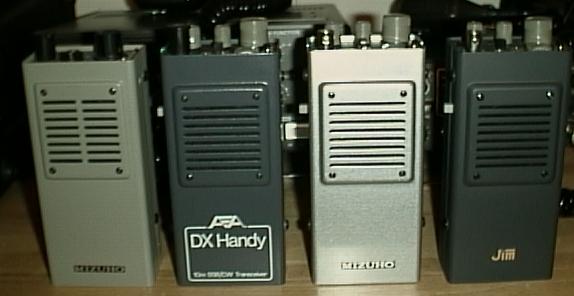